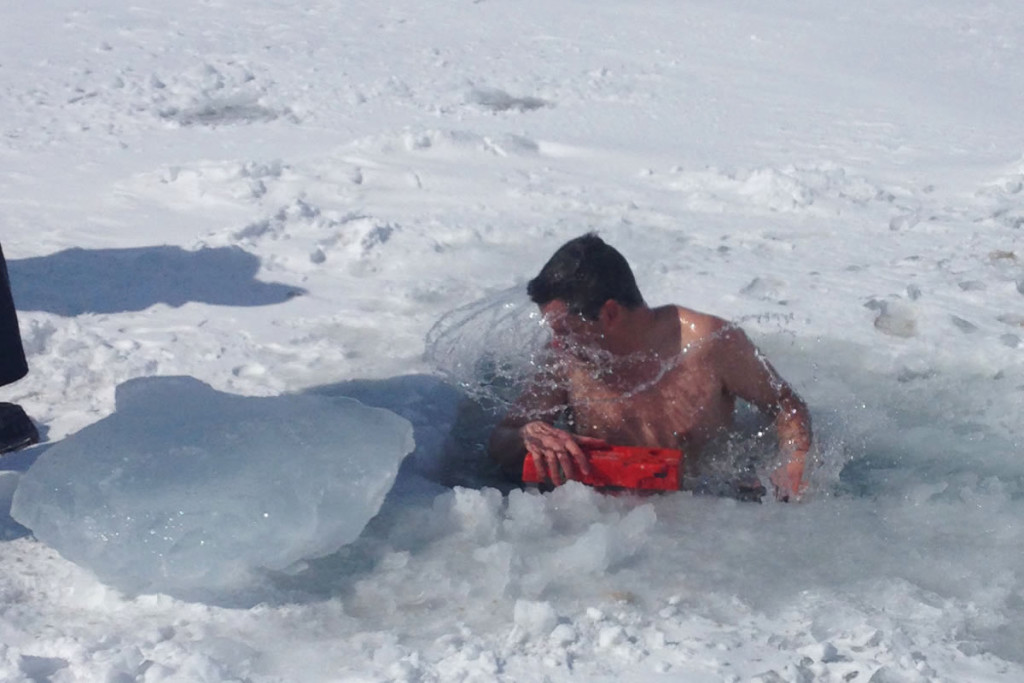 A quick and chilly plunge!

Moving up to Traverse City last summer, I knew I was in for some rough winters. But I had no idea how rough.

This winter has been insane! Lake Michigan began to freeze over in early January. By the end of that month, much of the lake was solid ice. February saw the mercury plunge to -20ºF on a couple of occasions. The winter has been so severe that some of my colleagues and I were able to hike (yes, hike!) from Pyramid Point to North Manitou Island 8 miles out into Lake Michigan!

At the end of February, I was introduced firsthand to a peculiar cold-climate custom: polar bear dips. My boss Bob Sutherland, the CEO of a northern Michigan company called Cherry Republic, has been doing them for years. In fact, he’s so committed to them that he has been able to keep up a streak of swimming in Lake Michigan at least once a month for over a dozen years.

To hear Bob talk of the experience, it is a brief plunge into icy water that utterly revitalizes body and soul. The cold is barely felt due to the rush of adrenaline. I was intrigued.

It was at the very end of February and Bob was in jeopardy of breaking his streak. The forecast for February 28 was dire. The temperature would be in the negative teens and a ferocious wind off the lake would see the wind-chills plunging to near -30ºF. He was close to giving up on maintaining his streak.

I told him that I’d jump in too, if he was game to do it. That tipped him over the edge, and suddenly he was all eager excitement in anticipation of the swim. I, on the other hand, was all “Oh shit, what did I just get myself into!”

The day arrived, and it was horrid. Biting cold and a wind that sliced into you like a scalpel. I figured there’d be no way anyone would be going swimming today.

I arrived in Glen Arbor and a colleague immediately asked me why I wasn’t out on the ice with Bob cutting the hole for our swim. Uh-oh. 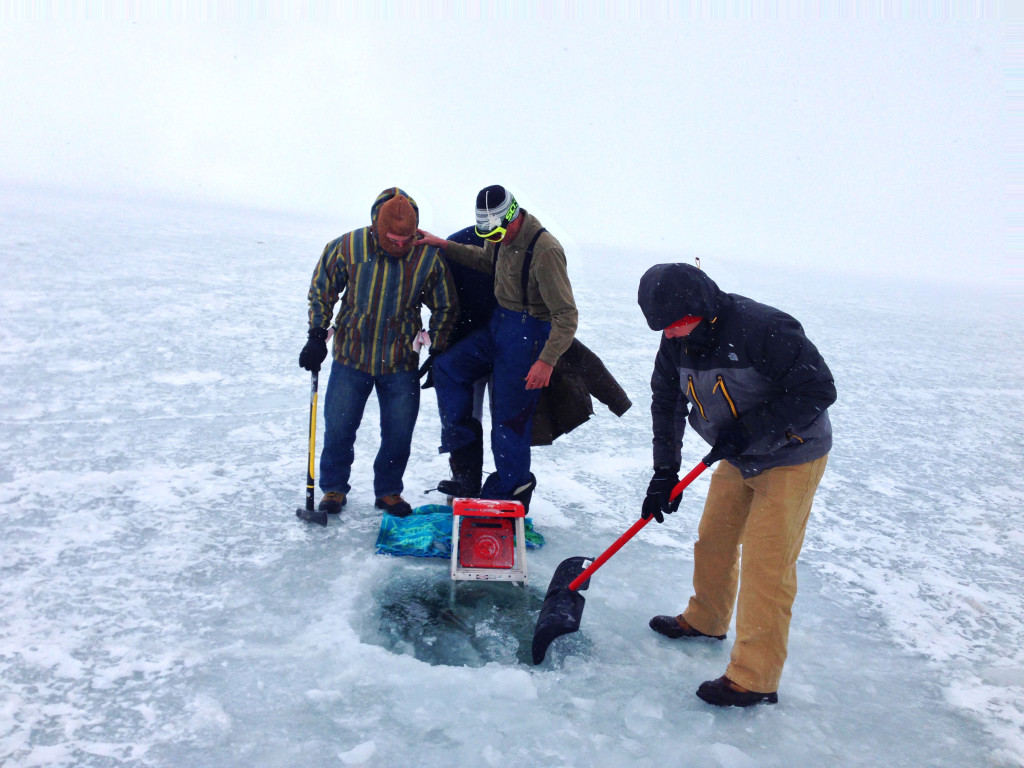 My boss, Bob Sutherland, gets ready to take the plunge. This picture does no justice to how fiercely cold this day was.

I headed out there to find Bob hacking away at the ice with a giant axe-like tool called a splitting maul with resolute determination on his face.

Fortunately for me, Bob would hear no suggestion of me joining on this one. It was way too cold a day to do your first polar bear dip, he said. So I was able to weasel my way out. 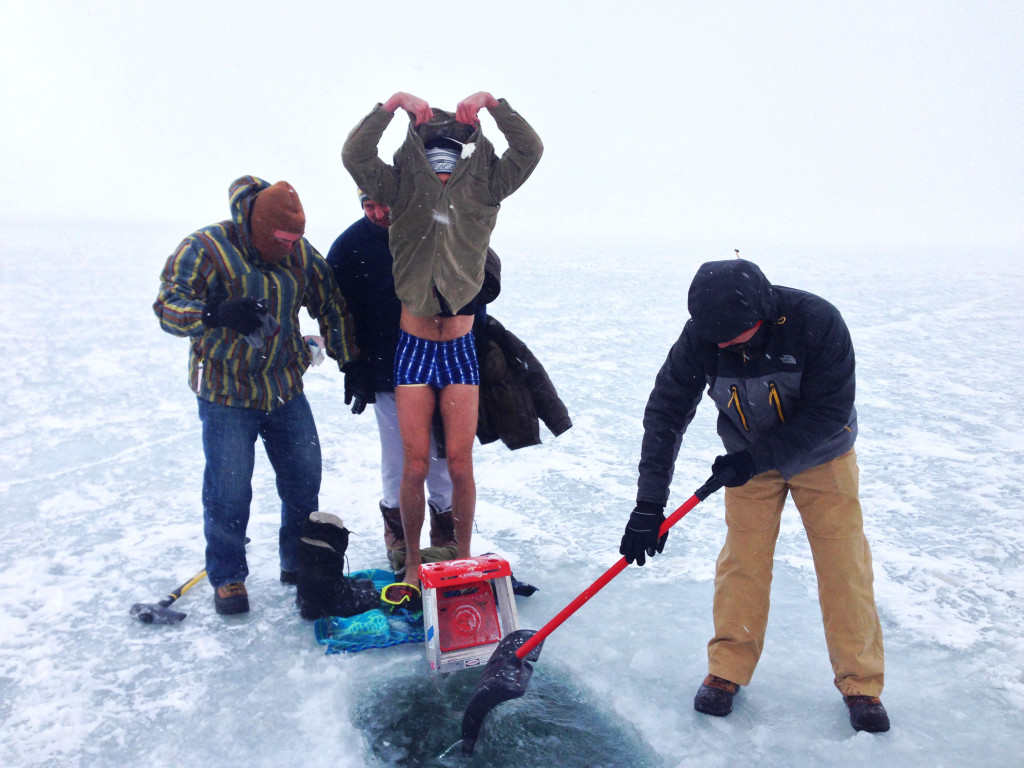 Stripping off in the -30 windchill took some guts. Bob said the water was a relief compared to that wind!

Bob was full steam ahead. We cut a hole in the ice, removed the plug of ice floating there, dropped a ladder in to the 6 feet of water, and in a blink, Bob had stripped off, jumped in and climbed out, and then ran back to the heated car. In -30ºF windchill!

I cannot imagine the pain of emerging from a frigid Lake Michigan, soaking wet and bare-skinned in the teeth of that wind. 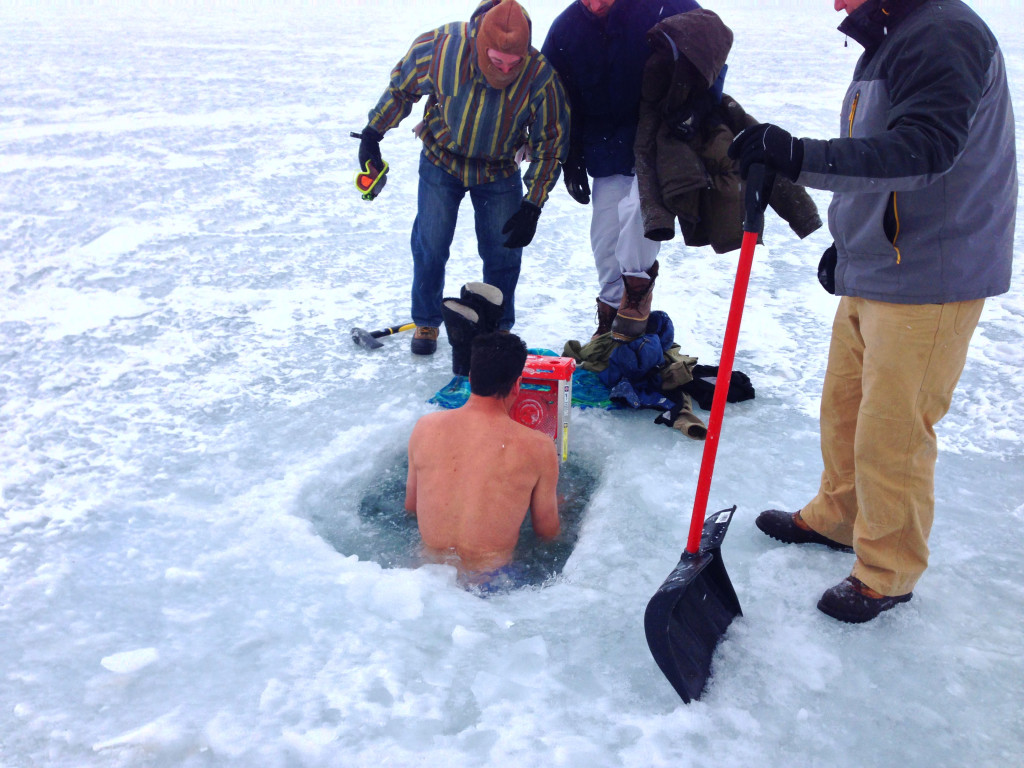 If you’re in any doubt to how cold this is, take a look at how the spectators are dressed! This was the only time I ever saw Todd (left) wearing a balaclava!

I got my own chance to experience a polar bear dip on a more mild day in March. It was a comparatively balmy 25ºF with only light wind. But the experience was much the same, if less hardcore. 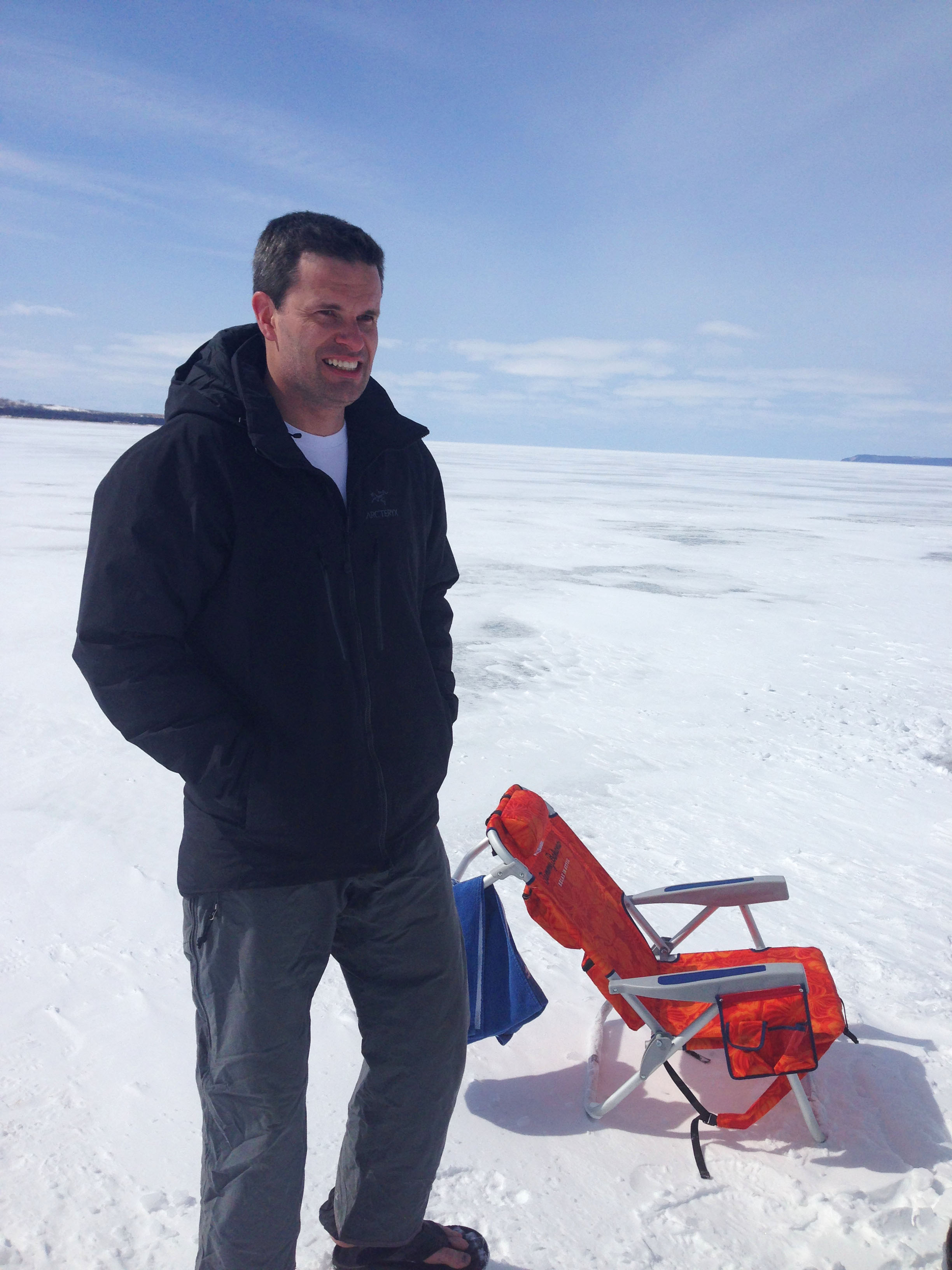 Although the weather was a fairly mild, mid-20s, my grimace suggests I was beginning to have second thoughts. 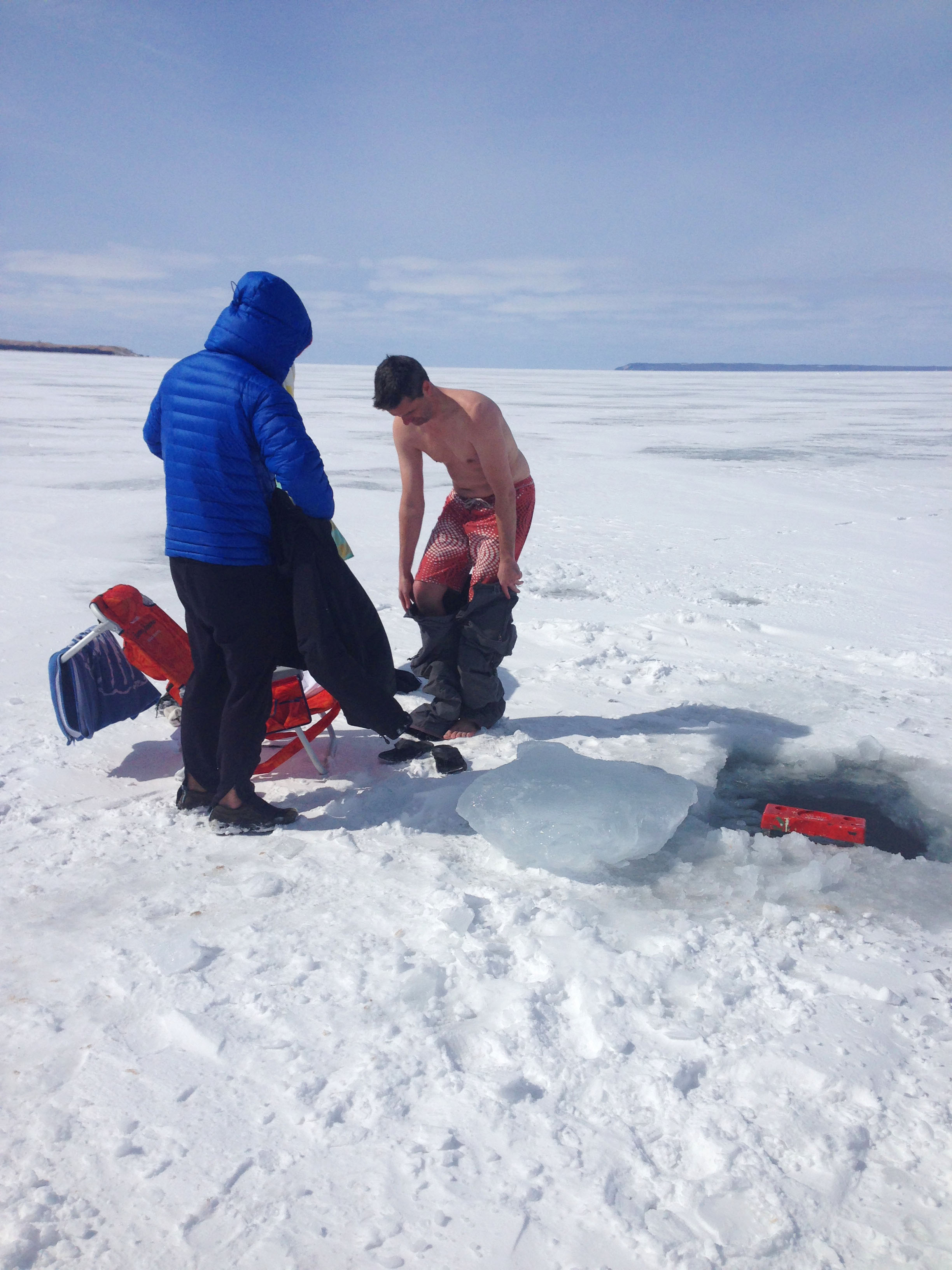 This was the worst part. The light breeze coming off the lake was pretty chilly and when it hit bare flesh, I nearly backed out! 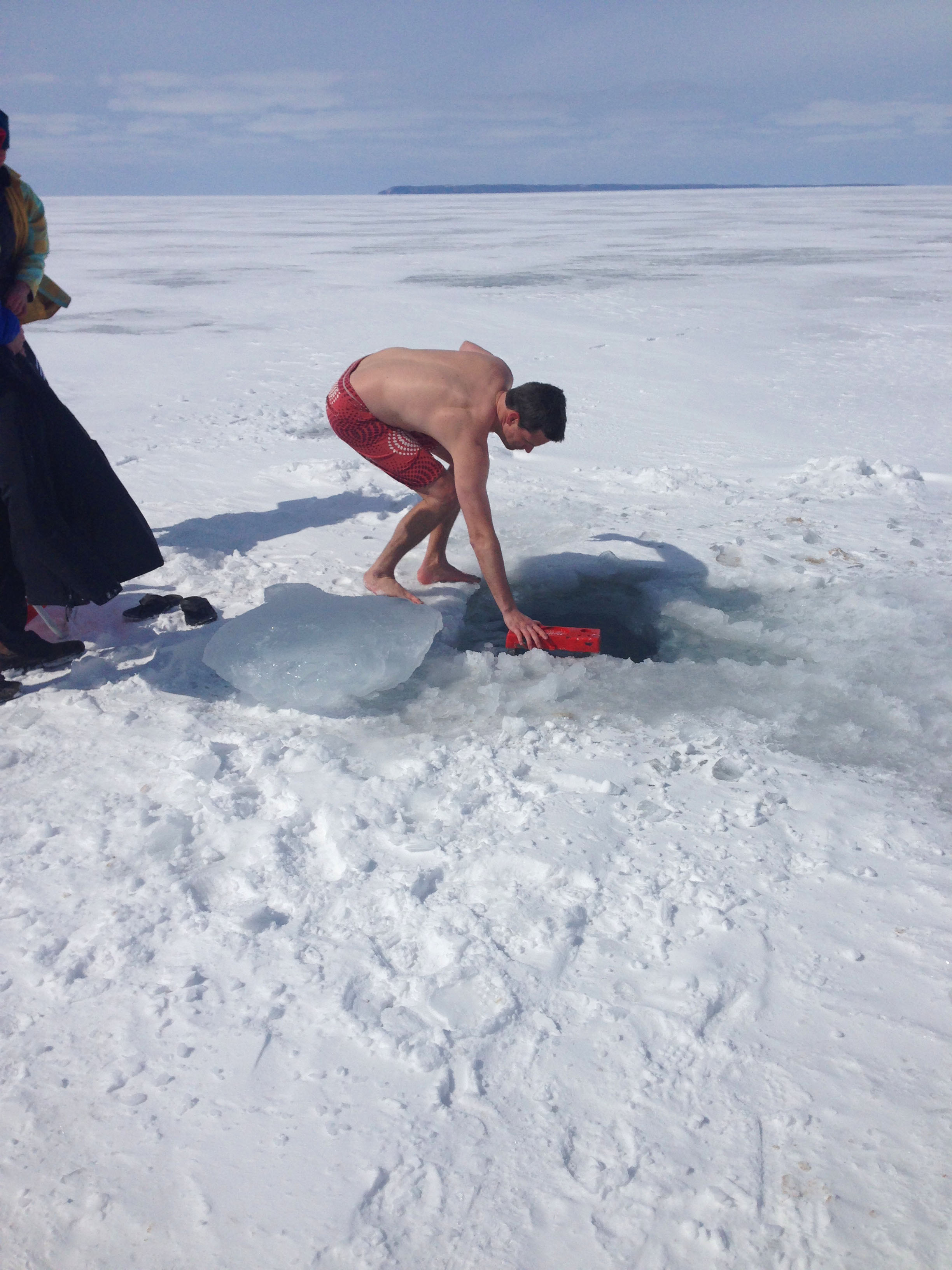 Here goes! That block of ice is what we pulled out of the hole after we had hacked our way down through 12 inches of ice! Sleeping Bear Bay was covered by ice at least 16 inches thick! 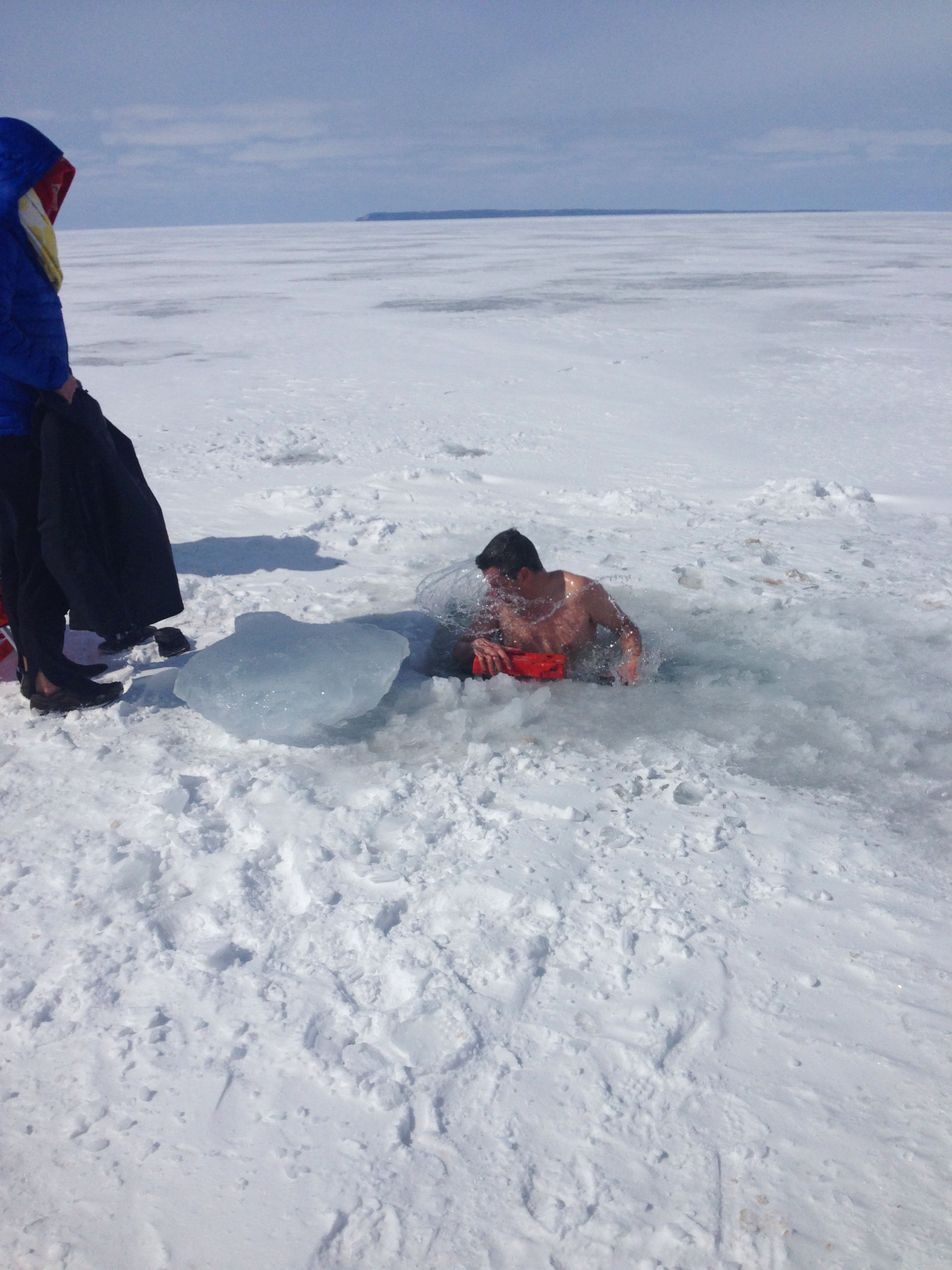 I have to say, it was a really amazing experience. I’ll never join the ranks of those who do it regularly, but it’s worth doing at least once in your life. And Bob’s right: it is thoroughly revitalizing.

I left the water with a surge of adrenaline, a tingling sensation across my skin, and a weird feeling of accomplishment. 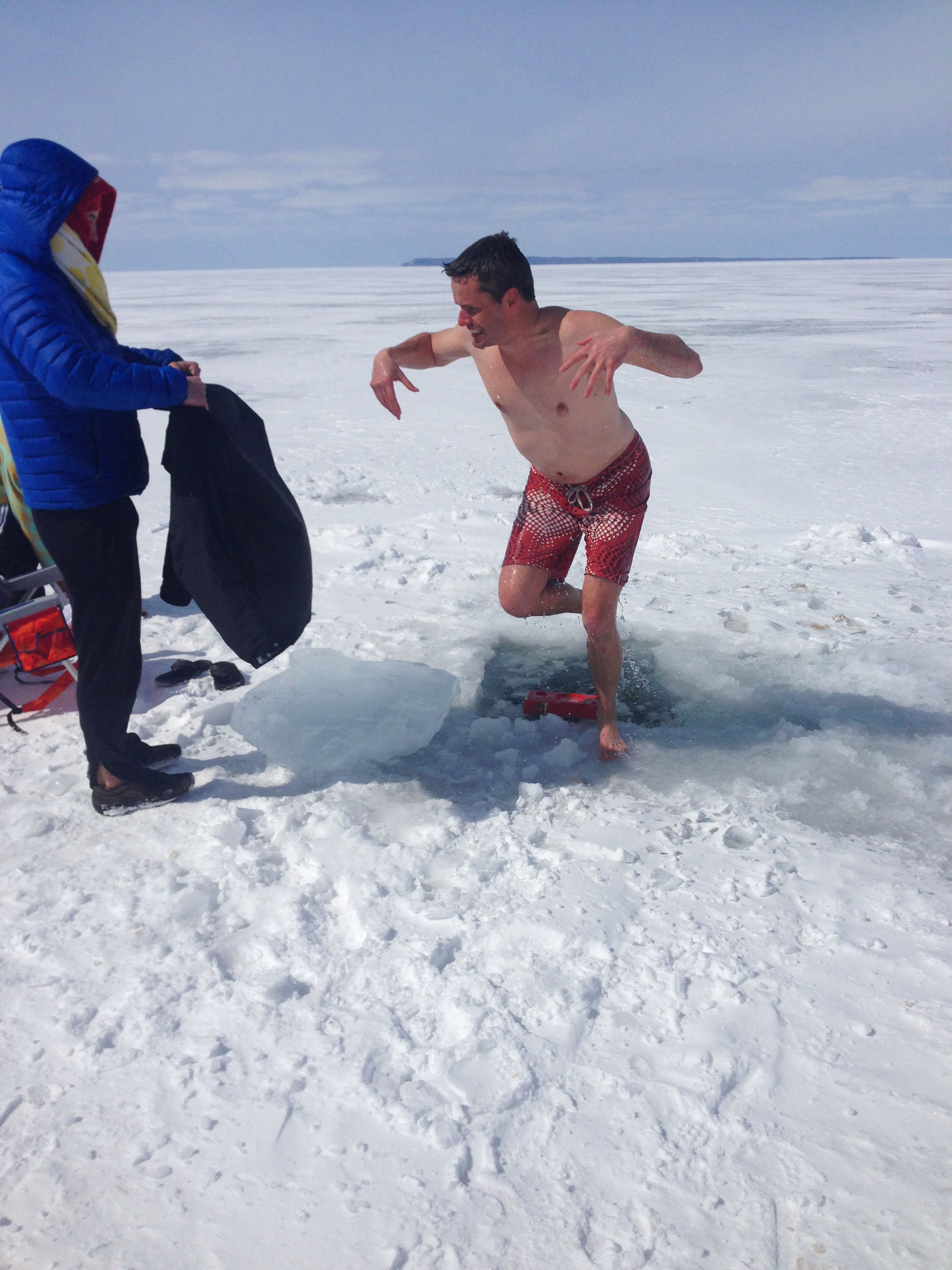 Now get me some clothes, stat!

So come on in! The water’s beautiful!